The first thing I ever learned to cook was an omelette.

One afternoon, I came home from school hungry. I was in first grade, between five to six years old. Usually, I helped myself to left over rice and some cold meat or fish dish from lunch. Sometimes, I would drizzle some leftover cooking oil, used to fry pork, over some rice and use a dash of soy sauce.  But that particular afternoon, there was only rice. I wanted scrambled eggs (omelette was a word I learned when I was much older).

I’ve seen the grown-ups crack an egg into a bowl, whisk it , and add a pinch of salt. I also remembered how low the fire was on the stove and that it was important to let the cooking oil heat up slowly so that the egg won’t stick to the pan. The scrambled egg should be poured into the pan slowly and evenly.

So, there I was, standing on a stool, holding a large lid like a shield against the sputtering hot oil, and prodding the omelette with an aluminum frying spatula. To prevent the egg from overcooking, I turned off the stove and clumsily transferred the omelette to a plate. I managed to feed myself that day and for many years after that. Sad to say, my cooking skills has never improved from that point. I chalk it up to laziness and to availability of take-out food.

I like eggs. I eat it almost everyday. I don’t know about health risks but it’s my go to food wherever I am. I am particularly fond of the boxed meals at 7-11 and I’ve been known to patronize an eatery called Tapsilogan – they served everything with an egg – in Talamban, Cebu City throughout the four years I spent studying there.

In homage to the omelette, let me share with you some of the memorable ones I managed to record. Aren’t smartphones fantastic?

We ate at Café France, formerly known as Delifrance. For years, I had my spinach and mushroom omelette at a branch just around the block. I usually opted eat it with wheat bread and chase everything down with brewed coffee. But a couple of months ago, that branch closed and I have yet to find a substitute provider for fluffy omelettes. For now, I’m subsisting on McDonald’s. Sad, I know. 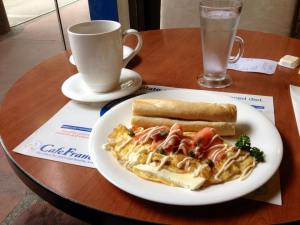 If I was feeling particularly posh, I’d get Café France’s Norwegian Salmon Omelette – basically smoked salmon on top of an omelette. Whenever I ordered this dish, it was to simultaneously satisfy my cravings for omelette and salmon.

In the first week of January 2014, my friend and I were in Penang, Malaysia. We explored Georgetown the night before and we woke up early to catch the bus back to Kuala Lumpur. On the way to the bus station, we decided to have breakfast at what may have been either a Bangladeshi or Nepalese eatery. We were given a breakfast menu, which had some items listed under the category “Eggs”. We gathered that “ayam” was Malaysian for chicken and “sardin” was, well, sardines. My friend, to be on the safe side, decided to have the Mubakar Ayam while I had the Roti Sardin. 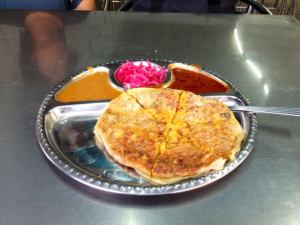 Mubakar Ayam came with a side of tomatoes and two dips: a very spicy red dip and some sort of chutney. The omelette itself had a slight hint of curry. Meanwhile, Roti Sardin was more like a cross between a pancake and an omelette mixed with sardines in tomato sauce with a hint of curry. As a kid, I’ve had scrambled eggs mixed with sardines in tomato sauce. I have never been fond of that combination but I found Roti Sardin interesting and proceeded to eat it all. I also ate my friend’s leftovers.

During my first trip to Paris in 2014, I did the obligatory exploration of Montmarte. I had walked, or climbed, all the way up to Sacre Coeur and surreptitiously took photographs of the interiors. There were signs at the entrance of the church that informed tourists that photography was forbidden. There were also watchers inside the church that walked up to you if you attempted to snap a photo. I took photos by pretending to be devout. I clasped my hands around my phone and pretended to pray to all the statues and images. I also sat and knelt on the pews and clasped my hands to the heavens – actually at the glass murals.

After walking around Montmarte, I was hungry. Almost all of the cafes were full of tourists. I stumbled on a small brasserie and perused their afternoon menu. They served omelette for afternoon snack. I sat myself and asked for Omelette Complete. And to add a sense of occasion, I also ordered a glass of chardonnay.

The waiter asked me where I was from. “Philippines” I replied. “Are you from Manille?” he asked. “Yes, Manille” I said with a smile. “You from Philippines have very warm smiles” he said. “Merci beacoup” and I beamed like the tropical sun.

Omelette complete meant that it was served with a salad and a basket of baguettes.  Apparently, I was eating and drinking with such relish that a couple of passers-by commented “Bon appetit!”.

I was staying at a hotel near the Rome Metro Station in Paris. On my street, there was an Asian restaurant, a small sandwich shop, and a brasserie where locals get their morning café. As much as I enjoyed baguette sandwiches, I was craving for something warm during a cool spring morning. I decided to check out the brasserie.

At the door, the morning’s selections were written on a blackboard. I took note of omelette nature, thinking it was an omelette with vegetables – I surmised that “nature” must have had something to do with plants. It turned out that “nature” meant plain. But, man it was tasty. It was lightly flavored with salt to bring out its natural flavor. I did not know that an omelette could taste so purely of egg. It was very fluffy and it must have been fried in butter. Anyway, it was not cheap. It cost me ten euros.

I was in Singapore with my mom sometime in March 2015. I was attending a conference organized by the International Bar Association. I was looking for something to eat at Bugis SMRT Station one evening and “Penang Omelette” caught my eye. Turns out it was an oyster omelette with three dips: vinegar, soy sauce, and hot sauce.

I’ve had oyster omelettes before but they were usually drowned in scrambled eggs and bamboo shoots. Not a lot of people I know like oyster omelettes – most find it gross. I love oysters, so an oyster omelette makes sense. What makes this particular oyster omelette memorable is that the binder is just the egg, no flour or vegetables. You can actually taste the fried oysters.   The dips also enhanced the oyster flavor. 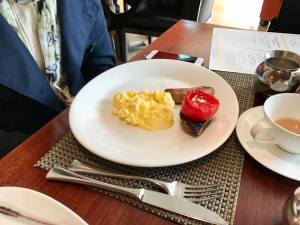 Sometime in November 2016, I had breakfast with a friend at Café Causette, Mandarin Oriental, Hong Kong. It was my treat and we shared the Mandarin Breakfast Set – Belgian Waffles with Strawberries, a small fruit platter, a pot of tea, scrambled eggs and sausages.

It is the most expensive breakfast I’ve had so far and cost me USD60. Yes, we could have had breakfast anywhere else but we wanted to break fast in style. And, dahlings, I earned the right to say “Yes, I’ve had breakfast at Mandarin Oriental”.

I went to Bonifacio Global City to use my voucher for a diamond peel. At that time, Sunnies Café had just opened.  WIth my face newly-smoothened, I dropped in at Sunnies and ordered Roasted Bone Marrow Rice Bowl(Sous Vide Hanger Steak Rice with Bone Marrow Omelette) and paired it with Sunnies Bday(gin, hibiscus syrup, lemon juice, basil).

It was a bowl packed with cholesterol. Bone marrow has a delicate taste and putting it on top of an omelette highlights its flavor.

I was having breakfast in Budapest with a friend who flew in from Ukraine. I took him to Anna Café in front of the Grand Market. I’ve had breakfast there in my previous visit to Budapest and you can have breakfast the whole day. It’s a nice café.

I had the Budapest reggeli(Budapest breakfast: eggs, bacon, Hungarian sausage, leek, vegetables). I thought it was going be served on a breakfast tray but it turned out to be an omelette. Really heavy breakfast but it powered me for most of the day. 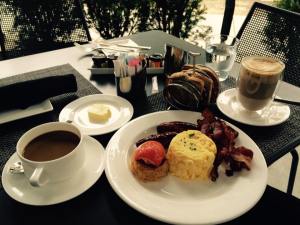 On my second to the last day in Washington D.C., I had breakfast at Dupont Grill House, right at the edge of Dupont Circle. An Indian friend wanted to have breakfast there but he left before we could try it. To annoy him, I decided to go and brag about it on social media.

I’ve flown enough number of times that I’ve gained access to the Emirates Business Class Lounges in Dubai. How long I’m going to continue to have access, I don’t know. I’m not made of money.

Every time I transit in Dubai, I always eat scrambled eggs and smoked salmon and drink all the Moet champagne that I could. You could say I’m sloshed whenever I’m in the business class lounges.  They also have very high-tech coffee machines that produce good coffee. And a good selection of salads, too.

Yeah, I know I should really get a life instead of compiling the omelettes I’ve eaten.