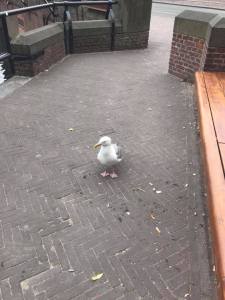 I was sitting on a bench just at the edge of Hofvijver Lake, The Hague, eating a huge slab of Dutch cheese and some bread. The cheese, which I bought for 10 euros was in its third day of my gradual nibbling. Since I had to check-out of the hotel at 10 am, I decided to have a late breakfast at the park.

I had arrived a few days before after my trip in Stockholm and Oslo, where I attended the International Bar Association’s Mid-Year Meetings. I flew from Oslo and landed in Amsterdam and took the train from Schiphol Airport to The Hague. A day after I arrived in The Hague, I sat as Bench Judge for the 2018 International Criminal Court Moot Competition organized by Leiden University, which lasted another few days. It was my last day in The Hague so I decided to spend some time just soaking in the sun and watching Dutch high school students on their school tour.

As I contemplated the meaning of my life, a young and pretty Dutch lady approached me. She might have been in her early 20’s.

She asked me if I was on break. I said no and told her today was my last day there. She asked if she could talk to me about life’s important questions. I sensed a religious talk was coming up and some people have used the same approach at a mall near where I live in Manila.

Since she seemed nice and earnest, I obliged. She showed me a 3-minute video in Tagalog(she asked where I was from) which was made by Jehovah’s Witnesses about how the devil was making the world a dangerous place: using all worldly forces to make everyone live in sin. I nodded because as a Catholic school boy, I still know the catechism about evil.

She asked me about eternal life and I said that strictly speaking, the Bible talks about the dead coming back to life – the true Judaic teaching. The notion that our souls leave our bodies upon death was a Greek or Roman modification. She smiled and nodded and said I knew the scripture well(as a kid of 7 or 8, I loved reading the Old Testament – drama, intrigue, murder, incest, power struggles). We talked about the catechism on evil, the destruction of this world and creation of the new, and that Biblical teaching cannot be given too wide an interpretation.

I told her about the The Chronicles of Narnia. All seven books are based on Christian theology. I explained that all these things we were talking about were actually taken up in the books. I also told her that the Christian teaching is that it does not matter if you worship a false god or no god at all, as long as you live by the teachings of the Lord. For what matters in salvation are ypur deeds and your thoughts.

She was taken aback by this but nodded in agreement. She said she will now look at Chronicles of Narnia in a different light. I think I did my bit of conversion for the fandom of Aslan. She said it is wonderful that I am also doing the good work. I bit back a smile, remembering the biblical warning that the devil can walk about in the guise of an angel.

Suddenly, a seagull swooped past above my head. It was obviously trying to get to my cheese. It hopped around us, menacingly looking at us and gradually moved closer. We tried to shoo it away but to no avail. It continually tried to get closer. Eventually, she said goodbye as she was greatly bothered by the relentless seagull.

Seagulls are little flying demons. But, in this case, was it just an innocent bird? I don’t know.