It was summer when I went to Venice with two purple luggage and a back pack. I took the bus from the airport and arrived at Piazzale Roma about three in the afternoon. Of course, the place was crammed with tourists, and I must have stood out among all of them because of my three bags. I looked at the steps of Ponte della Costituzione, forming a high arch over the water. I sighed and dragged my stuff over the pavement towards the steps.

Suddenly, a tanned Italian appeared beside me, acting all friendly and helpful. He offered to carry my luggage for me and kept asking where I was staying. What drew him to me might have been the Emirates business class tags on my bags – I got an upgrade on my Manila-Dubai leg. I was not daft enough to answer his questions and never let go of my bags. I politely refused his offer of assistance. “Don’t worry! We in Venice are very helpful. We like to welcome visitors!”. He never let go of my bag as we traversed the many steps over the bridge. I repeatedly told him that I was fine but he had turned deaf.

Once we got over the bridge, with him panting and me very sweaty – it was very humid – he offered to take me to my hotel. I told him again that I was alright and I knew my way. I tightened my grasp on my luggage handles because he might create a scene. If he was going to take my luggage hostage, there will be bloodshed. I can be as strong as Diana, Princess of Themyscira, if the need arises.

As we neared Stazione Santa Lucia, the man asked for a tip. “But I never asked you to help me”, I said. “But, I still helped you across the bridge! You should give me a reward”, he insisted. “I told you many times I’m fine”, I was unmoved. “People should help each other! You should pay for my service” he pressed. Two people walked past and briefly observed us with a something-is-going-down look. “I never agreed to that. We never had any contract. I told you many times to leave me alone, but you did not listen. You did that on your own”. He gave me a petulant look and acted like I was a horrible and selfish person. 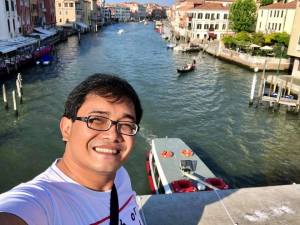 I don’t know. It must have been the strain of years of people guilting me into doing things, the long flight, or the humidity, that I could not summon even a trickle of empathy for him. I could only give him a look of indifference. Realizing that he was talking to stone, he turned abruptly and left in a huff. I walked on and clambered over a flight of steps on Ponte del Scalzi, which had a great view of the Grand Canal. Once I had crossed over into Santa Croce island, I dragged my luggage into the labyrinth of tiny streets and alleys and somehow managed to locate my hostel near the Riva de Basio vaporetto stop.

I was put in a six-bed mixed room with wide windows that had good views of the Grand Canal and the buildings on the other bank. I had a much-needed nap but was woken when three women walked in. They were speaking in Tagalog. I said hello to them and they said they thought I was Indian or from somewhere near the Middle-East.

Then the interrogation began.

The leader asked most of the questions: No, I’m not in a tour group. I am travelling on my own. I just flew in and will go to Munich and then Budapest to attend a seminar. I’ve been to Europe a number of times. This is a personal trip. I’ll be staying for three days. I don’t have an itinerary. I’m a lawyer.

Mindful about conversation etiquette, I inquired “Did you fly into Venice? What’s your itinerary?” “Oh, we flew in from London into Rome and then took the train through Florence and Bologna. We visited a Filipino friend of mine who is taking his doctorate at the University of Bologna”, she said smugly. I realized that she had interrogated me in a way to assess my background and financial capability. She also did not even bother to ask for my name or introduce herself and her friends. She just asked me a barrage of questions.

“What was your itinerary again?” she asked. “Venice, Munich, and Hungary”. “I thought you said Budapest!” somehow she derived pleasure in pointing out my inconsistent answer. I replied politely “Yes, Hungary”.

After an awkward silence, the leader launched into a very loud discussion about the expensive glass souvenirs she bought from Murano island. I pretended to be very busy with my phone while I noted that the kitsch she bought was ready-made and probably imported from China. If it were made on Murano Island, it would cost thousands of euros a piece. The fact that the three of them stayed in a hostel meant that they did not have that kind of money. She also lamented how much money she blew on leather goods and that she had bought her mother a Louis Vuitton wallet. Mercifully, my stomach was growling and I excused myself to look for food.

When I got back, the three women were not there. I was relieved. I took out William Carney’s “Mergers and Acquisitions: Cases and Materials” and started reading the chapter on the responsibilities of directors. After an hour, they came back. To preempt any conversation with them, I said “I hope you don’t mind if I keep my lamp on. I am doing my homework and I have to email this by midnight.” I hid behind my book.

“Have you read the title of his book? He must be a big shot!” the leader said audibly to her friend. After a few minutes of silence, she piped up “Are you into finance? I thought you were a lawyer.” “This is part of the curriculum of the class I’m taking in Budapest.” “Are you taking your masters?” “Yes.” I was determined not to give out more information than what was asked.

She called someone on her phone. She loudly told her mother that she had already made an itinerary for their next European trip, which will be from Prague to Budapest through the Danube River. Someone had oriented herself on the geography of Central Europe. After her phone call, she complained about her condo unit and discussed her plans to rent it out. The three of them also discussed the possibility that they could have been British in their former lives, because the place where they felt most at ease was London.

“By the way, how much did you pay for your Pandora bracelet?” she asked the one with blonde-colored hair. “DIdn’t it cost you about P100,000.00(about USD2,000)? They’re very expensive. If you buy the charms for the bracelet, it will cost you about P20,000(USD400)! I’m thinking about adding more to mine.” Her two sidekicks made concurring noises. Apparently, all of them had Pandora bracelets. A guy suddenly walked into our room and took the bed beside mine. They all fell silent and became very meek and shy. Just as I figured, all that bragging was for my benefit. 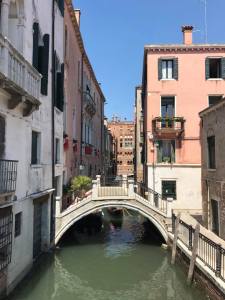 This is not the first time that I’ve been forcibly made a hapless audience to bragging. I thought about my friends who own decent-sized houses and luxury condos but barely mention it. I thought about people I knew who wear their P200,000(USD4,000) earrings for everyday affairs. I thought of someone who nonchalantly puts cookies in her Prada handbag or a croissant in her limited edition Coach handbag. I observed that despite their material wealth, they did not have good skin and the blonde one should get her hair colored at a good salon.

The following morning, I woke up early and snuck into the pantry for breakfast. I helped myself to some milk, cereal, yogurt, bread, Nutella, and orange juice. Some guests in other rooms joined me and we talked. Suddenly, the leader swept in, and without saying hello to everyone, sat in front of me and introduced herself. I cannot remember her name.

She asked me where I was working and what I was studying. I said I was studying international commercial practice. I was doing it for fun and to upgrade my skills. She said she’s never heard of any lawyer doing international work. I said it’s rare in the Philippine setting. She mentioned that she has lawyer friends but she earns more than them, since she was in the outsourcing industry. “You lawyers don’t have credit cards do you? And if you do, you have low credit limits” I said I did not have any problem in that department because my combined credit limit was sufficient to cover my travel expenses and education costs.

“I have an uncle who is a city prosecutor. We are very close! I’m always welcome at his office!”, she seemed to think that this was a sort of achievement. I thought about my friends who are prosecutors in different parts of the Philippines, my friends who are judges, my friends doing well in private practice, and the people I work with. “Oh, I see” I said politely. Without saying a word, she suddenly stood up and walked out of the pantry. The other guests, who had been silent while she was there, resumed our conversation. 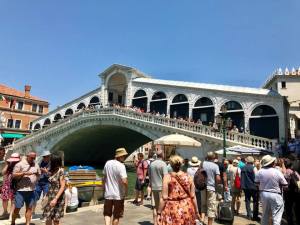 As I washed the utensils I used, I talked to a Canadian girl about the Realto Bridge, markets, and good places to buy souvenirs. Our conversation may have been quite audible because the two of us were moving back and forth through the pantry, living area, and the kitchen. When I entered the room, the three of them were huddled over the leader’s phone. “We now have an itinerary! We shall go to the Realto bridge and the markets!”. Why she was talking so loud while her friends were right beside her was a mystery to me. They were already ready to go but seemed to wait around for something. Could they be waiting for me to ask if I could join them? HAH! I pretended to rummage through my bag. After a few minutes of just standing around, they left. I waited fifteen minutes more before stepping out to avoid running into them within the vicinity.

By early evening, I was at a restaurant near the hostel. I ordered Spaghetti Al Nero Di Seppia paired with white wine. While I was eating, I overheard a very loud conversation in Tagalog from a group five tables away. So loud that their voices rose over loud Italian voices. After I ate, I walked past their table, because that was the only way back to the hostel. As I walked past, they abruptly fell silent. I acted like I just noticed them and said a curt “Hello!” and walked on.

Once I was back in the room, I took out my textbook and read about corporate takeovers. They came in about an hour later. There was no bragging this time and the leader talked about her family drama. But, occasionally, she’d say “He’s weird” or “Maybe he’s gay”. By then, I was too preoccupied with answering the essay questions that I barely noticed that they had fallen asleep.

When I woke up the following morning, they were gone.